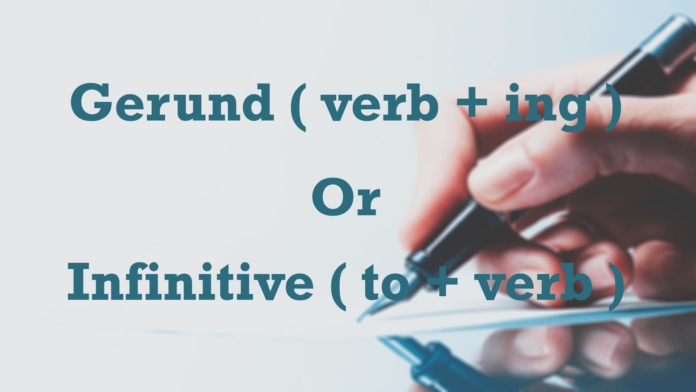 Gerund and Infinitive in English may seem like an invincible barrier for many as to what to use in a particular situation, having that common headache “Come on, is it an infinitive or gerund?”. You know what I mean.

However, that’s no longer a problem. Just rest reassured because hopefully this guide clears up all of the confusion. So, make sure to scroll down to the very end.

“Gerund” is the present participle form of the verb which is basically a verb followed by “ing”. For example: having, doing, learning. A gerund is a verbal noun. So, you should not confuse gerund with finite verbs. Don’t worry, we’ll break this down later.

“Infinitive” is more like the base unchanged-yet form of the verb preceded by “To”.
It’s equally important to draw a distinction between infinitive and bare infinitive.
Bare infinitive is the infinitive itself without “To” at the beginning.

Gerund and Infinitive Use

I hope you enjoyed the guide. if you did, share it to reach and clear the confusion of many.
You may also check How to Answer Reading Comprehension Questions

Family and Kinship in English | Part 3

Family and Kinship in English | Part 2

Family and Kinship in English | Part 1

ABOUT US
Achraf Dakdak, also known as DK, is a dedicated and experienced English language teacher. Through his website and online resources, he aims to make a significant impact in the field of English education, supporting learners and teachers around the world. By creating a supportive and enriching learning environment, DK hopes to inspire and empower individuals to achieve their full potential in the English language.
Contact us: [email protected]
FOLLOW US