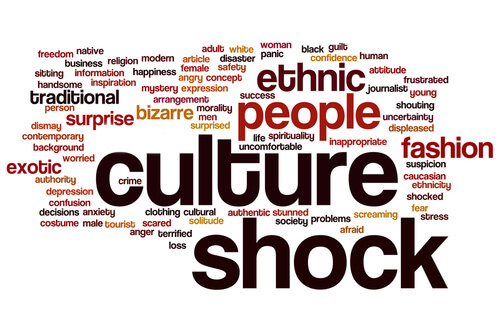 [1] Leaving home to study or work in another country can be a difficult experience. Such an experience is often referred to as culture shock. This phenomenon describes the impact of moving from a familiar culture to one that is unfamiliar.

[2] Karan Arora, an Indian student who recently landed in New York, tells his experience with American food. “I felt so sad when I first landed in the US and was served junk food everywhere. Everything here was tasteless. I really missed my homemade food,” he says.

[3] Jean, an American student in Japan, also experienced culture shock. When asked about what might cause culture shock, she says: ” From what I’ve experienced personally, I think that the language barrier is often the biggest challenge. I was very frustrated even before I arrived in Tokyo. I felt very embarrassed when the Japanese lady next to me wanted to start a conversation but I couldn’t say even a single word. As soon as I settled myself in Tokyo, I started Japanese classes.”

[4] Allison talks about a particular challenge he faced with the food and meals in Spain. “For those unfamiliar with Spanish cuisine, expect too much meat. Moreover, in England we usually have dinner at 6 p.m., but in Spain we ate at 10 p.m.,” says Allison. “It was also annoying for me to share lunch with many people. Sometimes, I just wanted to stay in my room and have a pizza alone, not the pizza they have in Spain,” adds Allison with frustration.

[5] Yoko, a Japanese student in London, says that she found it extremely difficult to adjust to the British life. “In my first week in London, my train was canceled without notice, a normal thing for a Londoner. Poor and frustrating services extend to banks. In Japan, good service and organization are expected as a matter of course,” she explains. “To overcome culture shock people should read as much as possible ahead of time about the country where they will be staying”, she adds.

[6] Although culture shock seems to be an unpleasant experience, it definitely opens your eyes not only to a different culture but also to your own. What we should bear in mind is that the customs and ways of life of the others aren’t wrong, they’re just different.