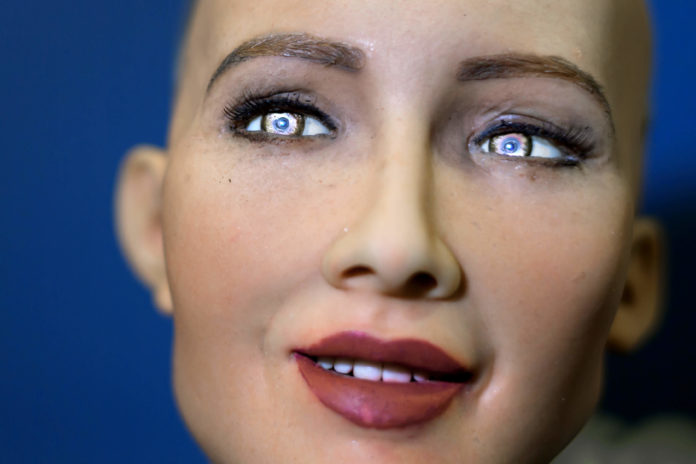 [1] Sophia smiles, blinks her eyes and tells a joke. You might think she was a human. You would only know she was a robot when you saw the cables at the back of her head. The humanoid robot was created by Hanson Robotics. Sophia has artificial intelligence (AI). Her brain is a computer made of electronic components. She spoke in Geneva to people meeting at a conference to discuss how artificial intelligence can be used to help humans.

[2] Over the years, machines and robots have changed how things are made. Fewer human workers are now needed to make things like cars or other products. David Hanson who made Sophia is a scientist. He agreed that fewer people will be needed for some types of work and that AI can be helpful. For example, it can help in health care and education in areas where there are not enough doctors and teachers. Robots can treat people who are sick and can teach with the knowledge of a computer.

[3] Still, there are fears that humans could lose control of the robots. Salil Shetty is the leader of Amnesty International, a group that works to protect human rights in 150 countries. At the conference, he warned that technology must be used only for good reasons. He said that artificial intelligence is still a mystery. Shetty is worried about using artificial intelligence as a weapon, or “killer robots”.

[4] Right now, Sophia does not really understand what she is. But Hanson said robots might be able to think for themselves in the future. This could be dangerous. One day robots might realize that they do not like working for humans. Hanson said we must learn how “to make the machines care for us.” Bill Gates and Elon Musk, along with other experts, have supported the use of AI on condition that it benefits rather than destroys humanity.