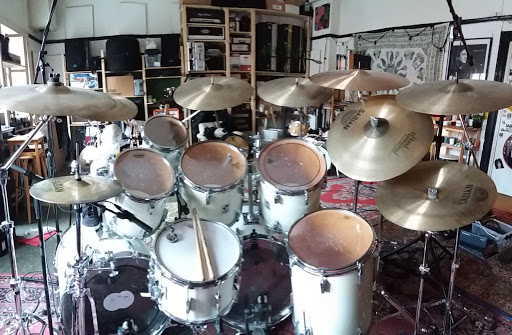 [1] Tommy, aged 15, is studying music and loves composing his own. It’s a real change from a few years ago when he had discipline problems and was excluded from school several times. The Drum Works project has given him space for his creativity and helped him stay out of trouble. Tommy attends the Warren School, where the Drum Works project has been running for the last three years. He’s been involved in the project since he was 12. “I was a real troublemaker,” says Tommy. “But then I got invited to Drum Works, and it really helped me.”

[2] There are about 100 students in the Drum Works project. They attend their sessions at lunchtime and play music in groups of 20. Each person plays his own preferable instrument. Instead of playing an already prepared music, the young people create their own collaboratively, based on the styles they enjoy.

[3] Tommy now plays the drums even outside the music sessions. “I used to play the trumpet, but I got bored of it, now I play the drums,” he says. “The project members are really helpful. If you can’t play well, they are not going to judge you for the mistakes; they’ll teach you till you know how to do it. I picked music from the school project, and now I can write my own music. Drum Works has helped me get more inspiring ideas.”

[4] Susie, a music teacher, remembers the change she saw in Tommy. “His behavior changed gradually. Tommy’s confidence improved as he realized that he’s talented at something,” she says. His patience and concentration improved too as he was trying to perfect his skills. He spent his lunchtimes in the music department practicing his best tunes. He enjoyed coming to school”. His mum believes that drumming has transformed Tommy. “Without it I’m not sure if he would even still be in school,” she says.

[5] Tommy enjoyed making progress. He learnt that the only way to improve is to make mistakes and that it’s ok to make them. “Managing to go out and play in front of many people is my proudest moment. When I first started drumming, I had to play in front of the class and I was so scared! Now I’m confident with it. The music project has made of me a different person”.