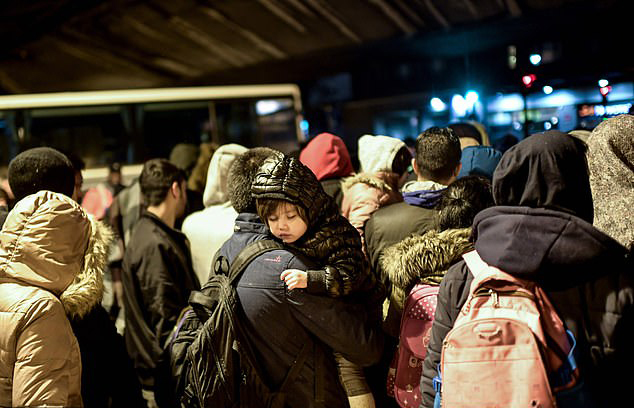 The night has been cold but Rama and her family will sleep outside again, their belongings beside them. Last month, French police forced Rama, her husband and two children to leave the flat they squatted in for years, but she then decided to stay on the pavement in front of the building until Paris city autorities offer them a permanent home. “All I want is dignity, a place to live,” said Rama, whose parents came from Senegal, a former French colony.

Dozens of families of African origin have been expelled from Paris squats* in the past few weeks. Anti-racism groups say their expulsions show the difficult situation of immigrants and their descendants in France, where many live a half-life on the fringes of society, discriminated against for jobs and housing because of their origins.

In the past five months, fires in crowded and dilapidated* Paris buildings have killed almost 50 people, many of them immigrants and children. The deaths not only shocked a city best known abroad for its spacious boulevards and historic monuments, but also revealed the living conditions of immigrants and exposed a grave housing shortage. Officials say Paris has about 60 unsafe squats and around 1,500 families live in flats that are considered and unhygienic. Many poor people say they have no choice. “Rather than staying outside with our children, we came in,” Rama said. “The walls were clamp and moldy. There was no electricity in the bathroom; I have been washing in the dark for years.”

In Paris, more than 100,000 families – many of whom are immigrants- are waiting for permanent social housing, officials say. For now, they live with friends or stay in shabby hotels or squats. Rene Dutrey from Paris’ Green party says it’s hard to say how many of these are foreigners but a majority of those living in unhygienic flats have an immigrant background. “They are the most vulnerable,” he said. “They face discrimination on the private housing market because many landlords don’t want black people. And they are discriminated against because they don’t have the resources.” Others say discrimination extends to the job market. “Many immigrants are doing the work the French don’t want,” said Jean-Pierre Dubois from human Rights group. “They are more likely to take on short-term contracts.”

In 2004, unemployment was at 9.9%, with about 28% of France’s African population out of work, official statistics show. “Immigrants more often hold no-qualification jobs, and are most affected by unemployment,” it was said in a study.

Rama, who has lived in France all her life and works in a retirement home, said it did not surprise her that the main victims of the recent fires were immigrants.

*squats: houses or flats where people live without permission and without paying *dilapidated: متلاشي