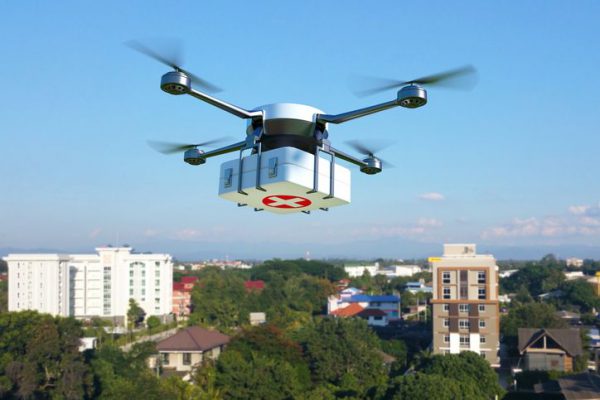 [1] For several days, 2-year-old Ghislane had been suffering from fever. A nurse at the village healthcare centre in Rwanda told her mother that Ghislane had malaria.  There was nothing the doctors could do, so they called an ambulance. But by the time Ghislane reached the main hospital, she stopped moving. Ghislane’s mother said: “We arrived too late.” She thought there was no hope for her daughter. The doctors said she needed a blood transfusion as the last resort.

[2] Immediately, a hospital employee typed a message on his smart phone. It was a request for two bags of blood. Normally, he would have sent a car and driver to get the blood from a blood bank. This would take 3 hours. But this time, he tried something new. His phone received a confirmation message: The blood was on its way. It would be delivered in a few minutes.

[3] In six minutes, the sound of a drone could be heard above the hospital. As it passed over the laboratory, the drone dropped a red box attached to a parachute. Inside the box were two bags of blood, still cold from refrigeration. A nurse rushed the blood to the emergency room. Within minutes, it was pumped into Ghislane’s body, and the child opened her eyes.

[4] In parts of rural Africa, many people die from simple diseases due to shortage of essential medicines. This problem was the inspiration for Zipline, a U.S. company. In March 2016, Zipline in collaboration with the government of Rwanda launched the world’s first drone delivery service. Zipline drones carry vital medical supplies to hospitals by air. The company has delivered more than 7,000 units of blood products to 21 hospitals in the country.

[5] These electric drones are called Zips. They look like small airplanes. They can fly 160 km on one charge. The drones can carry 2 kilos of blood products and reach more  then half of Rwanda. To launch a Zip, a technician puts it onto a catapult and enters its destination on a tablet. The whole process takes about a minute. The Zip flies using GPS. Once it gets near the hospital, it sends a text message announcing the exact arrival time. Then it slows down, drops its package, and goes back to its home base.

[6] “Before, it took at least three hours to get blood in an emergency,” says Dr. Nyonzima, a surgeon at a local hospital. “Three hours can make the difference between saving and losing a life. Now we get blood in 15 minutes.”