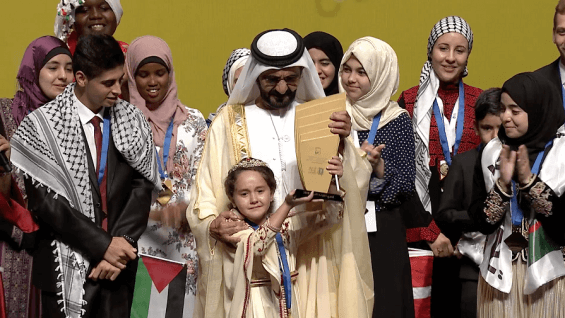 [1] Launched in September 2015, the Arab Reading Challenge (ARC) has become the largest project to encourage a million students in the Arab region to read 50 million books a year. Abdullah Nuaimi, the project manager, said the challenge aims to make reading a lifestyle. “When a school wins the challenge, the other schools from Arab countries will take it as a role model to enhance their performance for the next year,” he said.

[2] In 2018, the Moroccan Mariam Amjoun, aged 9, broke down in tears when she was declared the Arab Reading champion. She was able to beat over 10.5 million students from 44 countries who collectively read over 250 million books to win the grand prize. In a heartwarming scene, the vice president of the United Arab Emirates awarded the girl a trophy during the final ceremony in Dubai.

[3] Amjoun outperformed 5 finalists with her answers to the jury during the final ceremony. She was selected based on her comprehension of the 50 books she read, her ability to communicate accurately in Arabic, critical thinking and general knowledge.

[4] Speaking to the media, Amjoun said she expected to win. “I have been preparing for the challenge by reading, summarizing and analyzing books since 2017. Some of them were hard to comprehend especially history books, but a challenge has to be overcome,” she said.

[1] In October, 2018, Buenos Aires, Argentina, hosted the third Summer Youth Olympic Games (YOG) under the theme “Living the Future”. The event gathered about 4000 athletes from 206 countries. The Summer YOG is held every four years and is open to athletes aged 15 to 18, providing an opportunity to see the sporting stars of the future. The first summer edition was held in Singapore in 2010 and the 2nd one in China in 2014.

[2] Buenos Aires 2018 was the first Olympic Games to have an equal number of male and female participants, contributing to gender equality. There were 1,999 women and 1,999 men competing in 32 different sports. For the first time, the opening ceremony was held outside the traditional stadiums, open to the public for free.

[3] Buenos Aires YOG was marked by the participation of 20 Moroccan athletes in eight disciplines. The vice president of the Moroccan National Olympic Committee said that Argentina games have enabled Moroccan athletes to improve their performance and occupy advanced ranks in a number of sports.

[4] The Moroccan athletes have marked an unprecedented achievement in the history of participation in these games by winning seven medals. In Taekwondo,Fatima Zahra Abu Fares won a gold medal. Other athletes won five silver medals and a bronze one in different disciplines. The seven medals enabled Moroccan sport to rank 42 among the 206 countries that participated in the Youth Olympic Games in Argentina.